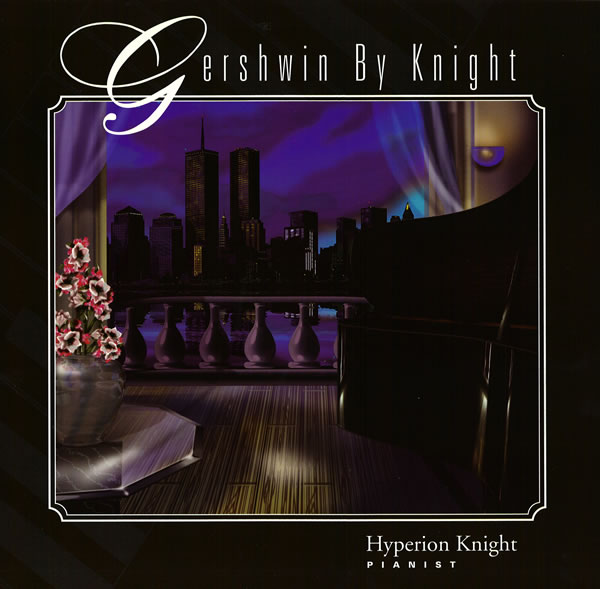 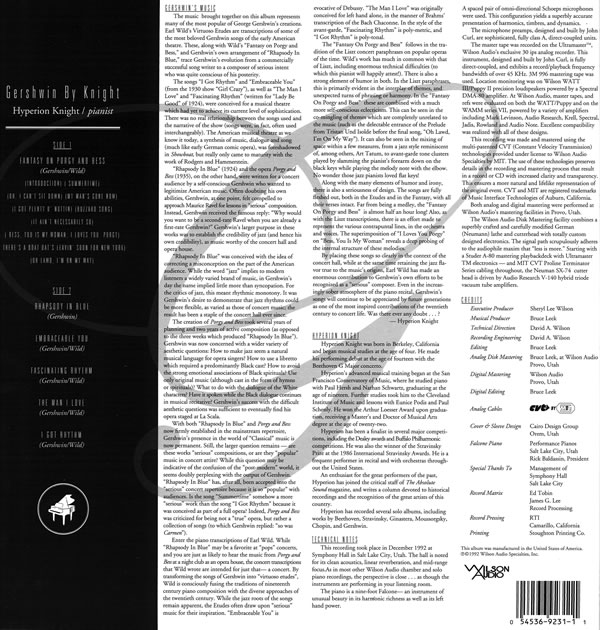 The music brought together on this album represents many of the most popular of George Gershwin’s creations. Earl Wild’s Virtuoso Etudes are transcriptions of some of the most beloved Gershwin songs of the early American theatre. These, along with Wild’s “Fantasy on Porgy and Bess,” and Gershwin’s own arrangement of “Rhapsody In Blue,” trace Gershwin’s evolution from a commercially successful song writer to a composer of serious intent who was quite conscious of his posterity.

The songs “I Got Rhythm” and “Embraceable You" (from the 1930 show “Girl Crazy”), as well as “The Man I Love” and “Fascinating Rhythm” (written for “Lady Be Good” of 1924), were conceived for a musical theatre which had yet to achieve its current level of sophistication. There was no real relationship between the songs used and the narrative of the show (songs were, in fact, often used interchangeably). The American musical theatre as we know it today, a synthesis of music, dialogue and song (much like early German comic opera), was foreshadowed in Showboat, but really only came to maturity with the work of Rodgers and Hammerstein.

“Rhapsody In Blue” (1924) and the opera Porgy and Bess (1935), on the other hand, were written for a concert audience by a self-conscious Gershwin who wanted to legitimize American music. Often doubting his own abilities, Gershwin, at one point, felt compelled to approach Maurice Ravel for lessons in “serious” composition. Instead, Gershwin received the famous reply:

“Why would you want to be a second-rate Ravel when you are already a first-rate Gershwin?”

Gershwin’s larger purpose in these works was to establish the credibility of jazz (and hence his own credibility), as music worthy of the concert hall and opera house.

“Rhapsody In Blue” was conceived with the idea of correcting a misconception on the part of the American audience. While the word “jazz” implies to modern listeners a widely varied brand of music, in Gershwin’s day the name implied little more than syncopation. For the critics of jazz, this meant rhythmic monotony. It was Gershwin’s desire to demonstrate that jazz rhythms could be more flexible, as varied as those of concert music; the result has been a staple of the concert hall ever since.

The creation of Porgy and Bess took several years of planning and two years of active composition (as opposed to the three weeks which produced “Rhapsody In Blue”). Gershwin was now concerned with a wider variety of aesthetic questions: How to make jazz seem a natural musical language for opera singers? How to use a libretto which required a predominantly Black cast? How to avoid the strong emotional associations of Black spirituals? Use only original music (although cast in the form of hymns or spirituals)? What to do with the dialogue of the White characters? Have it spoken while the Black dialogue continues in musical recitative? Gershwin’s success with the difficult aesthetic questions was sufficient to eventually find his opera staged at La Scala.

With both “Rhapsody In Blue” and Porgy and Bess now firmly established in the mainstream repertoire, Gershwin’s presence in the world of “Classical” music is now permanent. Still, the larger question remains — are these works “serious” compositions, or are they “popular” music in concert attire? While this question may be indicative of the confusion of the “post-modern” world. it seems doubly perplexing with the output of Gershwin. “Rhapsody In Blue" has, after all, been accepted into “serious” concert repertoire because it is so “popular” with audiences. Is the song “Summertime” somehow a more “serious” work than the song “I Got Rhythm” because it was conceived as part of a full opera? Indeed, Porgy and Bess was criticized for being not a “true” opera, but rather a collection of songs (to which Gershwin replied: “so was Carmen”).

Enter the piano transcriptions of Earl Wild. While “Rhapsody In Blue” may be a favorite at “pops” concerts, and you are just as likely to hear the music from Porgy and Bess at a night club as an opera house, the concert transcriptions that Wild wrote are intended for just that— a concert. By transforming the songs of Gershwin into “virtuoso etudes”, Wild is consciously fusing the traditions of nineteenth century piano composition with the diverse approaches of the twentieth century. While the jazz roots of the songs remain apparent, the Etudes often draw upon “serious” music for their inspiration. “Embraceable You” is evocative of Debussy. “The Man I Love” was originally conceived for left hand alone, in the manner of Brahms' transcription of the Bach Chaconne. In the style of the avant-garde, “Fascinating Rhythm” is poly-metric, and “I Got Rhythm” is poly-tonal.

The “Fantasy On Porgy and Bess” Follows in the tradition of the Liszt concert paraphrases on popular operas of the time. Wild’s work has much in common with that of Liszt, including enormous technical difficulties (to which this pianist will happily attest!). There is also a strong element of humor in both. In the Liszt paraphrases, this is primarily evident in the interplay of themes, and unexpected turns of phrasing or harmony. In the “Fantasy On Porgy and Bess” these are combined with a much more self-conscious eclecticism. This can be seen in the co-mingling of themes which are completely unrelated to the music (such as the delectable entrance of the Prelude from Tristan Und Isolde before the final song, “Oh Lawd, I’m On My Way”). It can also be seen in the mixing of space within a few measures, from a jazz style reminiscent of, among others, Art Tatum, to avant-garde tone clusters played by slamming the pianist’s forearm down on the black keys while playing the melody note with the elbow. No wonder those jazz pianists loved flat keys!

Along with the many elements of humor and irony, there is also a seriousness of design. The songs are fully fleshed out, both in the Etudes and in the Fantasy, with all their verses intact. Far from being a medley, the “Fantasy On Porgy and Bess” is almost half an hour long! Also, as with the Liszt transcriptions, there is an effort made to represent the various contrapuntal lines, in the orchestra and voices. The superimposition of “I Loves You Porgy” on “Bess, You Is My Woman” reveals a deep probing of the internal structure of these melodies.

By placing these songs so clearly in the context of the concert hall, while at the same time retaining the jazz flavor true to the music’s origins, Earl Wild has made an enormous contribution to Gershwin’s own efforts to be recognized as a “serious” composer. Even in the increasingly sober atmosphere of the piano recital, Gershwin’s songs will continue to be appreciated by future generations as one of the most inspired contributions of the twentieth century to concert life. Was there ever any doubt . . .?